Padstow celebrates Mayday in a unique way, and the custom that has been carried out by Padstonians over centuries has not been allowed to die out. The exact origins of the tradition is unknown, but like other festivals during spring it is thought to be connected with the ancient Celtic festival of Beltane.

C.S. Gilbert wrote about what he saw there almost 200 years ago:

‘There is an annual jubilee kept up at Padstow, on May 1st, known by the name of the Hobby Horse, in illusion to which, the inhabitants dress up a man in a horses skin, and lead him through the different streets. This odd looking animal amuses, by many whimsical exploits, the crowd which follows at his heels, particularly by taking up water dirty water, wherever it is found, and throwing it into the mouths of his gaping companions. These tricks naturally produce shouts of laughter, and the merriments are accompanied by songs made for the occasion. The origin of the festival appears to be unknown.’

Taken from ‘Historical Survey of the County of Cornwall’, published in 1820.

Before the First world war there was only one hobby horse in Padstow, the old oss, but in 1919 the blue ribbon obby oss the was introduced. Also know as the temperance oss, its supporters tried to discourage the drunkeness associated with the custom. There are records of a few attempts to tackle the sometimes raucous behaviour asscociated with the festival, but none have ever worked. During 1837 some residents did not approve of people firing pistols in the air during the celebrations, and so rallied together to try and stop it by putting up posters which threatened people who did fire guns with a fine.

What Happens on the Day

Mayday in Padstow starts at midnight on April 30th, when its inhabitants sing to the landlord of the Golden Lion Inn. They then carry on singing as they move around the town until the early hours of the morning.

The next day some people are up early collecting flowers to display around the town. Tree branches are tied to lamposts and drainpipes. By around 8am children start to parade their obby oss’s in preparation for the main event. The maysong is played by accordianists and drummers while the supporters sing along.

The Blue Ribbon obby oss leaves the Padstow Institute at 10am to begin its tour of Padstow. Next the Old obby oss appears outside the Golden Lion Inn at 11am. The two oss’s dance round the streets followed by their supporters and at 12pm the old oss has reached Prideaux Place, where it dances outside in front of a large crowd, before it heads back to the Golden Lion Inn. The Blue Ribbon oss visits Prideaux Place later on in the day.

The obby oss outfits are worn by various members of each group throughout the event, and they also take in turns teasing the oss. The teaser waves their teaser club in the air, and dances around the oss while leading it through the streets of the town. The two obby oss’s carry out similar parades at 2pm and 6pm, ending their day around the maypole on Broad Street. Just before it gets dark they are returned to their stables. All the supporters then meet up once again around the maypole at midnight to sing once again. 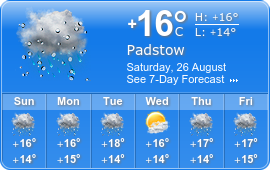